"As in any fairytale, everything good must come to an end." ENTANGLED DREAMS: 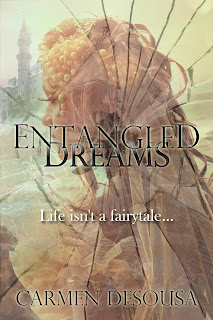 Now, if you’ve read any of my novels or excerpts, you know I don’t do happy-go-lucky beginnings; and as in any fairytale, a little rain must fall, or in the case of my stories, I prefer a monsoon.


But alas, as in any good fairytale, everything good and wonderful must come to an end.


After the tragic accident that snatched her mother away from Alexandra, her father moved them away from the beaches of Destin to another beach in Florida. Cocoa Beach.


Cocoa Beach was loud, the water murky, and there were no weekend adventures as there had been in Destin.


Her father married her evil stepmother, Lilith, who Alexandra was certain was a witch with her long, black as midnight hair and pale-white skin as if she’d never seen sunlight. Her father had admitted he wasn’t in love with Cruella, as she had come to think of the witchy woman, but that he’d wanted Alexandra to have a mother and siblings.


Well, she definitely got that.


The king started staying out later and later at night, and the princess had to do excessive amounts of chores around her new castle. Her stepmother treated her like a pariah; certainly, she’d rather have the dogs at their dinner table. Her stepsisters were ugly inside and out and were forever jealous of Alexandra and her golden-blonde tresses. Anything nice Alexandra ever received mysteriously disappeared.


Alexandra knew something was wrong with her father, but she was too young to understand. Her father, forever the happy-go-lucky guy, had turned to drinking to drown his troubles.


It sounds like your typical fairytale, but it isn’t. There are no furry creatures to help the princess prepare a gown for the prom, no fairy godmother to waive her magic wand and produce glass slippers. In fact, at age sixteen Alexandra found herself living on her own with no family contact and no prospects of a healthy, normal life.


Alexandra had only one advantage, if you could call it that. Alexandra was beautiful. But so far, her beauty had not opened any doors; actually, it had only caused her misery.


The only people who welcomed Alexandra were the outcasts. The parents of other losers in school fortunately didn’t care who slept over and what they did when they stayed the night. So, Alexandra Nicole, now deciding to go by Nicky, as she was no longer a princess, found herself wandering from house to house throughout her remaining high school years.


And then she met him…