HEART LIKE AN OCEAN by Christine Steendam #HistoricalRomance via @ChrisSteen1991 @5PrincePub 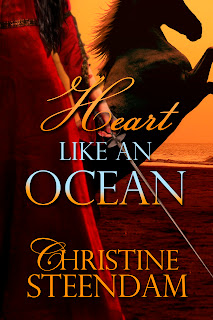 In a society where she doesn't belong, Senona Montez, a strong-willed and free-spirited woman refuses to follow the path expected of a Don's only child.

On the eve of her marriage to a stranger, she saddles her horse and flees everything she knows, only to discover the petty concerns of society did not prepare her for the harsh life on the open sea. She finds an unlikely protector in a reckless privateer, Brant Foxton.

Straddling the worlds of independence and privilege in 1600's Europe, this captivating man challenges her in ways she never thought possible, shows her what living to the fullest really means, and allows her to follow her heart wherever it leads.

What impressed me most about Heart Like an Ocean was the author. It is a historical romance novel, and yet, Christine Steendam is in her twenties. Maybe it's the values, which I see so rarely nowadays, and the fact she wrote a compelling and heartfelt novel without resorting to gratuitous language and sex.

Heart Like An Ocean takes you on a true adventure across the seas with fascinating and stubborn characters you'll want to shake your fists at in frustration, but cheer for them at the same time.


The story does not fall into an anticipated pattern, which while surprising, was also refreshing, as I dislike ordinary. Usually I can predict how a novel will end by the first three chapters, but I have to admit Ms. Steendam shocked me. Well done, Christine! And... I demand a sequel!

A little about Christine:

Christine has been writing stories since she could put pen to paper and form words. Now, many years later, her debut novel is scheduled to be released and her second book is in the works.

Christine has spent the better half of her life owning and working with horses, and these four legged companions often find their way into her stories. After all, no work of women’s fiction would be complete without a horse or two (in Christine’s opinion at least).

She currently makes her home in the center of the world—no, really. Look at an atlas.

Posted by Carmen DeSousa at 8:16 AM