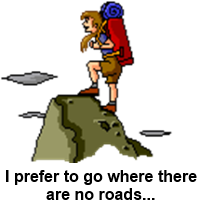 My college professor would turn over in his grave if he heard this confession, but I just can’t do it. No matter how hard I try, I simply cannot write an outline. Oh, I’ve written them, had to. It was required to graduate my professor’s class, but they are worthless to me when I write my novels. And I’m not criticizing writers who outline their stories, believe me. On the contrary, I envy them. For one, they pretty much have a completed synopsis when they are finished, again something I lack. Heck, I can barely write a synopsis after I finish the story.

But worse, not only can I not write an outline, I can’t even see the next chapter. I swear that I really do have a muse who whispers in my ear.

It dawned on me the other day that this in pretty much how I live my life, how I vacation, how I decorate. All of it.

A travel agent? Are you kidding me?

Twenty years ago, hubby and I came home from work on a Sunday night, packed our bags and one-year-old son, and drove to North Carolina for a mini vacation and to check out the state. Three months later, we moved to Charlotte, North Carolina. Eight years later, we moved back to Florida, a week after I received an amazing job offer.

Pay for excursions on a cruise ship? Don’t even think about it. I talk to the locals, find where the best places are, and GO!

Design and color coordinate my house? Not a chance. One day, one store, and I’d chosen the drapes I would live with for the next ten years.

I’d never thought about it before, but I guess that’s who I am. But because someone told me it would be easier, I tried. I sat down and tried to write where my story was going. I had the entire chapter planned out—I didn’t want to get ahead of myself; this was a test. ONE CHAPTER! I couldn’t even plan one chapter.

I told my character—okay, my male protagonist told the female protagonist exactly what he wanted her to do. I knew exactly how the scene was going to play out. Had my entire day scheduled based on the plan I’d sketched out that morning. And darned if she didn’t do the exact opposite, changing my entire chapter. Yep, there I was typing away and all of the sudden my fingers are typing the complete opposite, and then the crowd milling around my couple cheered her on. Sigh!

Now what on earth am I supposed to do with that? What if I’d taken the time to plan the entire novel? Nope! Never again. If my characters don’t speak, I move on to a different story. In fact, here’s a tidbit you may have interest in and one I’d be curious if anyone else does.

All my stories have a ‘whodunit’ with the exception of one, and it’s still a suspense, it’s just not a ‘whodunit’, rather it’s a ‘what happened in the past’ question. And yet, I never know ‘who did it’ until the character reveals themself. I am just as surprised as the reader is. How’s that for being a panster?

Any other authors do this? Any suggestions on what you think works? I’d love feedback on both styles. And I always love hearing from readers.

By the way, here’s the excerpt from Entangled Dreams where my character disobeyed my explicit instructions. I removed the characters’ names so you wouldn’t have any spoilers, but I hope you agree that her actions made the scene better. Love that little muse of mine.

He looked back at her. “I want you to go now. Don’t look back. Just keep walking. Okay?”
She nodded and stood up on obviously shaky legs as she wobbled toward him. But she pulled in a deep breath as though pulling herself together and stood to her full height. “I’ll be waiting by the phone for your call. I love you too.” And she turned and walked away, head held high.
He couldn’t help but smile as he turned toward the detective. “I’ve got one heck of a woman there, gentlemen. Only a man with a woman like her could smile while being arrested for something he didn’t do.”
The officer tried not to smile, but he could see it was with great effort. He turned around and put his hands behind his back for the officer to cuff him. It was the third time in his life he’d been cuffed and taken to jail. He knew the drill.
The officer’s words behind him faded into his subconscious as he kept his eyes locked on her. A crowd of people had gathered around, but all he saw was her as the officer patted him down.
At the last second, before she lowered herself into the taxi, she looked back in his direction. “I love you!” she screamed, loud enough for the entire port to hear. “I’ll love you forever, and I’m proud to be your wife.”
The gathering crowd cheered and clapped as he felt the officer direct him to the car. Tears streamed down his face, and he was glad she hadn’t listened to him. “I love you too!” he called back as loud as he could as the officer touched the top of his head, lowering him into the back of the police car.

Thank you for stopping by my place and reading my musings. Remember, these are just my opinions and shouldn’t be taken too seriously. If you have questions, please feel free to leave them in the comment section, and I promise you I will answer.  If you’re curious about what I write, please visit one of my author pages, where you can read all about my novels and short stories. And hey, I’ll even give you a free book just for stopping by.


Amazon US
Amazon Worldwide Link
iTunes
Kobo
Barnes & Noble
If it isn’t available free in your area, use…

Posted by Carmen DeSousa at 5:18 AM