Excerpt from LAND OF THE NOONDAY SUN 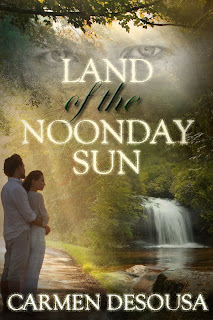 Just a few of the reviews:

"Wow! Carmen DeSousa has written another emotional and suspenseful story about family, friendship, love and betrayal that captured my attention from the very beginning."

"What I really have to say about this book is WOW! It has it all! Romance, suspense, mystery, tragedy, faith."

"I loved this one. I think it has a lot to do with the characters. Carmen DeSousa may be incapable of writing a hero that doesn't make me melt."

"Passionate characters, beautiful North Carolina setting, true love, and a bang-up mystery to tie it all together. Need I say more? "Land of the Noonday Sun" is a must-read!"

Or read the short prologue...


“Walter,” his mother whispered as she opened his door. She hadn’t entered his bedroom in years. He cringed as he awaited more of her wrath. “I’m sorry,” she murmured, sitting down gracefully on the edge of his bed. “It wasn’t your fault. I’m sorry I hit you."
He puckered his lips and sniffed as he attempted to retain the tears. “It’s okay, Mom. It was my fault. Everything was my fault.”
She sighed. She couldn’t deny the legitimacy of his words. “I love you, Walter, and I’m sorry for everything. Sorry I haven’t been a better mother, a better person. But I wanted to wish you goodnight.”
She kissed him on the forehead and then left without another word, pulling the door closed behind her. She never apologized. Why would she start now? Especially when she wasn’t responsible.
Walter rolled over, drew his legs in tightly and repositioned himself into a ball. He wished he could change the past, wished he’d never returned, wished they’d locked him away forever. It was his fault; everything was his fault. He wished he’d never been born. Only fifteen and he’d already ruined his life.
Hours later he heard his father creep into his bedroom, no doubt checking that he'd remained home as instructed.
How could his father have worked after everything that had happened? His way of retreating from reality, Walter imagined. His father had been a physician for years; he didn’t have to take after-hours emergency calls. He could have allowed one of his interns to take the midnight-calls. He owned the practice for God’s sake!
As he thought about his father, anger replaced his tears. “Typical,” he muttered in disgust, exhaling in the dark room. Maybe his father was the reason their family was so deplorable. No. He needed to stop blaming others and accept responsibility for his actions.
“Priscilla,” he heard his father’s peal of agony. “Priscilla, my God, No! Please don’t do this to me!”
Walter bolted out of bed and sprinted down the hall toward his parents’ room. His heart pounded fiercely in his chest. His legs felt heavy and sluggish as if he was in a nightmare. “Dear God,” he prayed. “Please…”
Rounding the corner of his parents’ doorway, he saw his father administering CPR on his mother.
“Dad?” he choked out, his voice trembling. “Is Mom—” He couldn’t frame the word.
“Call 911!” his father shrieked.
Walter couldn’t move. His mother lay lifeless on their king-sized mattress, a bottle of whiskey on the nightstand alongside an empty bottle of prescription medication.
“Walter, call 911!” his father belted again.
He did as instructed but knew it wouldn’t make any difference. If his father couldn’t save her, nobody could.

And so you know my new novel really is a romantic-suspense and not just tragic laden, below I will post a few excerpts.


Let’s meet one of the main characters through our protagonist's eyes:

She had to stick to the plan. She was twenty-five, in the middle of the country, drooling over a whitewater guide, not exactly the person she’d envisioned herself falling for. Of course, she knew the feelings barraging her senses were nothing but lust, something completely unfamiliar.
If she compiled a list, he would fill it…right up until the chosen career line, which would probably be foremost. He was exactly the correct height, about six feet she guessed. He had dark hair with a small amount of curl that went whichever way it pleased but worked for him. His skin was dark from all the hours in the sun, she assumed, which caused his brilliant blue eyes to stand out. And his build…she sighed...his arms and shoulders were incredible. He looked as though he’d just stepped out of a Hollister advertisement.
She shook her head to escape the ridiculous thoughts racing through her head. Remember the plan, Cassandra. This is merely a six-month detour, and then she was back on the plan. It wasn’t like her to get her head turned so easily; she was forever sensible.

“You thought what?” she jumped in. “That I was one of your bimbo college girls, looking for a weekend fling? Do you flirt with all the female patrons as you did with me?”
He shook his head as if trying to clear it. “No…I mean…No, I don’t usually flirt with customers. It’s against our policy. Besides, I wasn’t the only one doing the flirting,” he rejoined.
“I—no I wasn’t,” she huffed. “Don’t delude yourself. As if I would be interested in a whitewater guide. I’m a law graduate for Pete’s sakes!” As soon as the words escaped her mouth, she was disgusted with herself.
She saw his face drop and immediately wanted to apologize for her ill-mannered remark. She wasn’t a snob; she didn’t care what people did for a living. She respected everyone’s choices in life and their careers.
He scooped his keys and files off the desk. “You don’t know anything about me, Cassandra,” he spewed, his tone reproachful. Abruptly, he turned and exited the office, leaving her standing in the doorway. Unwillingly, she followed him out of the office. Why had she uttered such an atrocity? She was flustered, was the reason. She didn’t want to admit she had been flirting.

After he storms off, she's left standing there, wondering what she should do next.
Without warning, the memory of him taking her hand yesterday assaulted her. She remembered the warmth that had rushed through her. She had never felt even remotely attracted to any man the way she’d felt toward him. She really should leave this state immediately, but for some reason she couldn’t. She couldn’t find the courage to struggle for anything right now. The last few years had been so stressful. This could be an opportunity for her to stop and take a hard look at her life and, of course, there would be a handsome payday at the end. So that was it then. This would just be a six-month job opportunity, like interning.
“Are you coming?” Chad’s voice rang out, startling her. “Follow me if you want to.”
Follow him…if she wanted to. They were the identical words he’d used yesterday—right before she found herself dumped in the frigid waters of the Nantahala.

Last week, Cassandra had been left standing on the sidewalk, wondering what she should do about the predicament she was in with this handsome stranger. Well, maybe they might get along…maybe.

The evening was beautiful she had to admit. The sun, having just set behind the trees, cast streaks of orange and red across the nighttime sky. The surrounding wood, previously quiet only moments earlier, suddenly filled with chirping. Millions of insects of some sort belted out an unfamiliar melody. She was familiar with crickets and frogs after sunset in Florida, but this was neither.
She must have looked confused, because he smiled and motioned his hand to the surrounding trees. “Cicadas, the chirping you’re hearing. They emerge between May and September. Interesting fact, the insects lay dormant for seventeen years before surfacing to mate, only to die afterward—tragic.” He grinned seductively.
She couldn’t resist smiling, but ignored his flirting. “Really…I’ve never heard of them.”
“There are many things I can teach you, Cassandra,” he drawled, serious again.

Okay, one more romantic scene, and then we really must get on with more tragedy and mystery; it’s what I do.

As soon as he set her on the ground, she heard the waterfall. She gazed at the pounding waters as they fell over the rock and hit the stream below. “Wow, this is…so beautiful and so close, right off the road, near our house…amazing.”
He smiled. “This is nothing, Cassie, hardly anyone even comes here. I’ll show you some waterfalls and trails over the next few weeks that will take your breath away.”
Cassandra couldn’t contain her smile or the feelings rushing through her veins. He wanted to show her his state. It was beautiful she realized, and the thought of discovering it with him made it even more exciting. She was certain he was correct about taking her breath away, but she was also sure it wouldn’t just be the waterfalls.

This is it! Last excerpt for Land of the Noonday Sun, and yes, I’m going to leave you guessing, I hope.

The woman looked at her calendar. “She had an appointment for three forty-five. No, I’ve not received a cancellation and that really messes up our day. Is she still coming?”
He turned away from the woman in disgust, charging out of the building. He made a call to the house. Again, no answer. He called her mobile again, nothing. Now what? What else was there to do?
He ran his hands through his hair frantically. If he left…she could show up. Or, she could be in a ditch somewhere. Decision made, he jumped in his truck. He’d keep a lookout the entire way, hoping she’d pass him. He watched the entire trip back to the store…there was only one way to go; she would have had to pass him if she’d been on the road.
He stormed through the parking lot, but her car wasn’t out front. He parked his truck sideways in a no-parking zone and jumped out of the truck, charging into the building.

Want more? Land of the Noonday Sun, my bestseller in romantic-suspense, is available in print and eBook formats.