500 and Counting ~ Scene 7, a Short Story readers help write. Catch up and join in! 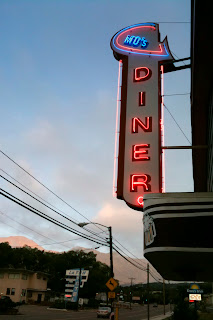 And just to make this interesting, I offer up one of my novels free to the commenter whose suggestion I use.

(If you haven't read the first scenes, please click on the link. Otherwise, the story won't make sense. Don’t worry; there's a link, which will bring you right back.)

Gino pushed the food around on his plate. His mind kept returning to the pictures of his grandfather.
“Ouch!” He looked across the table at his wife.
Sheila smiled. “I’m sorry, was that your leg? I didn’t know you were here. I thought I was eating alone.”
“Funny.” He looked back down at his food.
“What’s up? You haven’t said a word since you walked in the house. Well, unless you count the grunt you uttered.” She rested her hand on his arm. “Talk to me. Is that dream still bothering you?”
He exhaled a deep breath and threw his head back. If it were only that easy. How could he tell his wife he’d been hearing ghost chimes and smelling pipes that weren’t there. She’d think he was insane. He was starting to wonder himself.
Gino tapped his thumb on the table then stopped himself. He’d been trying to break the nervous gesture. He couldn’t question a suspect with a tick that’d give him away if he were trying to convince them he had evidence when he didn’t.
“Not exactly.” He couldn’t lie to Sheila; she’d see right through him. They’d been married five years, and he swore she knew him better than he knew himself. He ran his hand across his mouth. “There was a double homicide last night.”
“Here?” Her eyes widened, as she pulled her hand to her mouth.
“No. Brooksworth.”
Her hand fell to her lap. “So, why are you involved?”
“Their deaths mirrored my grandparents’”
“But I thought—”
“Yeah, me too,” he interrupted her. “It just doesn’t make sense. I’m having all these crazy dreams, and then suddenly Captain takes me aside to tell me about a homicide that matches my grandparents’ death, and that he’d always thought theirs was suspicious—”
“He said that,” she cut in.
Gino nodded his head. “Yeah, but that’s not the worst part. When I got to the crime scene, I found a photo album of an old football team from the fifties. And when I checked it out, there were several pictures missing. But even stranger, my grandfather was on the team.”
Sheila leaned forward as if not understanding. “Your grandfather’s pictures were at the crime scene?”
He nodded. “Exactly. Wait a second.” Gino jumped from the table and ran upstairs. He pulled down the attic stairs and climbed up. Walking carefully, stepping only on the beams, he made his way to the back of the attic. He’d moved all his grandparents’ items up here when he’d moved in. The idea of throwing away their personal stuff just didn’t seem right. After all, it was their house.
A box of old photo albums sat in the corner, covered with years of dust. He knelt down beside it and sorted through the years his grandmother had marked on the side.
There it was. 1957. He flipped through a few pages until he saw the name he was looking for. He’d just spoken with him this morning. Smitty.


Okay, friends, what happens next? If you’ve been following along, we now have a suspect. Heck, some might say we have two. Is Smitty involved? Hmm…Can’t wait to see what you guys have in store for us. J