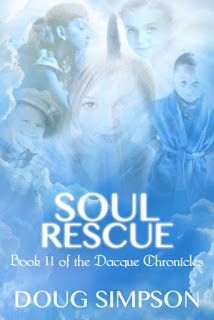 Dacque LaRose, the protagonist in the Dacque Chronicles, is a very unusual Good Samaritan who has been selected by the Heavenly Powers to assist Them in rescuing deserving souls in need of rescuing, no matter whether these souls still reside in human bodies or have departed from their human residences when their body passed away. Dacque’s soul has earned this exalted position as God’s helper through his exemplary actions and clean living throughout his numerous previous incarnations, as well as his current lifetime. To assist Dacque in carrying out these noble duties he has been bestowed with unique powers in this lifetime, powers which allow him to see and converse with spirits as well as receive direct messages from the Heavenly Powers.

Soul Rescue is the recounting of Dacque’s latest adventure where he is directed to the local children’s hospital to locate and assist the earth-bound spirits of five children stranded for many decades. Dacque is rewarded with three touching personal relationships throughout this adventure and a totally unanticipated surprise at the conclusion of his Heavenly assignment.

Soul Rescue, Book II of the Dacque Chronicles, is a fictional novel inspired by a series of actual events.

Doug Simpson is a retired high school teacher who has turned his talents to writing. His first novel, a spiritual mystery titled Soul Awakening, was published in the United States in October of 2011, by Book Locker. His magazine and website articles have been published in 2010 to 2012 in Australia, Canada, France, India, South Africa, the United Kingdom, and the United States. His articles can be accessed through his website.

Posted by Carmen DeSousa at 5:46 AM