Sometimes you want something so badly you are willing to abandon everything you've ever known--including yourself. 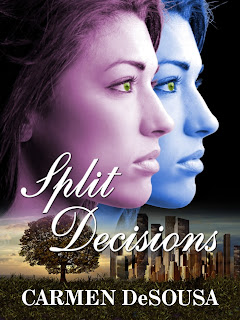 This is an excerpt for a follow up novel to the romantic-suspense bestseller, She Belongs to Me. Though there aren’t really any spoilers, you can bypass this sample and read more about the first book here.

If you missed the first excerpts and want to read the full first chapter, click here.

After dinner, Jordan collapsed on the couch, turning on a political analyst he’d recorded. Jaynee sauntered over to the sofa, allowing him to pull her down as he stretched the full length of one side of their sectional. She tucked her head under his chin, hungry to feel the warmth and comfort of his arms. “I don’t want to watch TV.”
He twirled her hair around his fingers. “What would you like to do?”
“Well, I’d like to go to bed, but we have to discuss Johanna.”
“Can’t we go to bed then talk afterward,” he said in his seductive southern drawl.
She couldn’t resist the giggle that escaped. “Somehow I don’t think that will work.” Jordan wasn’t good about staying focused when his mind was on other things.
“Yeah, you’re probably right. Let’s go.” Flicking off the TV, he sat her upright. He stood up then extended his hand. As long as they’d been together, it still sent a flutter through her when he offered his hand and led her upstairs. After kissing the kids goodnight and listening to their prayers, they readied for bed at their individual sinks.
Jordan caught Jaynee as she rounded the corner, folding her into his arms. He kissed her on the lips, then leaned back to look at her face. “Before we talk about Johanna, tell me what’s going on with you.”
“What do you mean?”
He huffed lightly, shaking his head. “You’re sad, I can feel it. I just want to know why.”
“I’m not sad.” How did he do that?
“Well, maybe you’re not sad, but you’re not happy.”
Shrugging out from under his arms, she crawled up on the bed and scooted to the headboard. Anytime they had large discussions, this was their MO. Jordan’s eyes were guarded as he slid in beside her. He held his back ramrod straight, ready for impact.
Everything else took a back burner at his distressed expression. “Jordan, what’s wrong?”
Clinching his jaw, he ran his hand through his hair. “I haven’t seen you like this. Just talk to me, okay?”
Jaynee inhaled a deep breath, not sure how to begin. He was apparently thinking something awful, as if she wanted to leave him. It made her want to make him admit it, but she decided not to upset him more. How should she start? Not with the, you-know-I-love-you speech, that wouldn’t go over well. He would read too much into it. She had to structure her words perfectly.
“Jaynee,” he implored. “I was a detective, remember?”
How could she forget? He’d been shot at, at least three times that she knew of. Thank goodness he’d finally quit. But, once a cop, always a cop.
“Jordan, I swear nothing is wrong.” She bit her bottom lip, not certain how much she should reveal. “I guess you’re right, though; I am melancholy. I wake up feeling dismal and empty.” The last word came out in a whisper; she hadn’t wanted to admit it to herself either. “But not when I’m with you. Only when I’m alone.”
“But you were like that this morning?”
She gulped and gazed down at her lap. “Yes.”
He nudged her chin up. “And I was here.”
“It’s not you; I love you. I swear it’s not you.”


He nodded, but she could see he wouldn’t accept it. Jaynee scooted up on her knees in front of him. The last thing she needed was for him to doubt their relationship. Taking his head between her hands, she stared into his eyes. His gaze dropped, unwilling to maintain eye contact. He was so tough, and yet he could be so breakable. She would never let happen what had happened almost thirteen years ago. His lack of confidence had almost destroyed them. He’d actually told her to leave if that was what she’d wanted. It wasn’t what she wanted, not then, not ever.

Posted by Carmen DeSousa at 1:00 AM