In every myth there is a modicum of truth, CREATUS ~ Supernatural Romantic-Suspense Excerpt 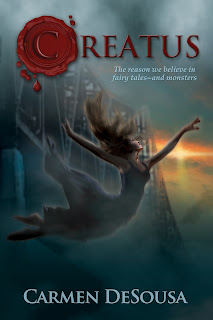 In every myth there is a modicum of truth…


Creatus, the reason we believe in fairy tales—and monsters.

In my new novel, for the first time ever, I deleted the prologue and the first chapter and jumped right into the story, but I do love prologues, as I know many of my readers do as well, so I couldn't part with it.

Now the back flap, which is actually an excerpt:

As the sun’s rays peeked above the horizon, lighting the abyss below her, she inhaled a deep breath, closed her eyes, and jumped. She didn’t scream; she didn’t look down. As much as she hated her life, she hoped it wouldn’t end this way. She’d really like to see him one more time.

Her life didn’t flash before her eyes as she’d always heard. Just an image of her mother covered in blood and her Dark Angel telling her he was sorry.

The Creatus Series is not your normal paranormal story... It's a realistic twist of the myths you've heard your entire life. Prepare to believe...

Or..save by downloading them all...

The first three books in the series are only $5.99!
Creatus Boxed Set
Amazon, iBooks, Nook, Kobo

But wait...there's more...
When the next book in the series releases,
I'll update the book, so you can upload the newest version...
...which means you'll get four books for less than a fast-food meal! Just make sure you add your email at the top right of the page, so you receive the notification.