“Why did you save me?” Excerpt from CREATUS, a new Paranormal #RomanticSuspense 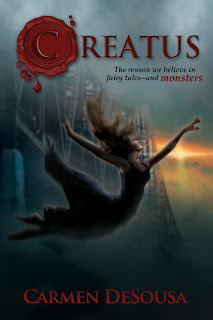 This excerpt is from Creatus Book One. If you'd like to read the first three chapters in the series, The Prequel, you can find it here.

“Why did you save me?” she screamed into the black void, similar to her life. She hadn’t asked him to save her when she was eight years old.
As always, no one answered her ridiculous peal, which was probably just as well. Attracting attention in this part of town wasn’t smart. She clicked the key fob for her Grand Am as she scanned the street. She barely even remembered driving here after she left the nightclub.
The problem with drinking too much, which she did far too often these days, was that as her inhibitions fell, so did her standards. The man from the bar had been cute, but he’d obviously wanted something other than money in exchange for a hit. What else should she expect when she followed a man home whose name she couldn’t even remember.
She hadn’t planned to go home with a stranger. But when he’d suggested they could get high together, it had sounded like fun, a chance to escape her nightmares and her empty apartment. A chance to do anything but feel the pain she endured by her guilt every time she closed her eyes.
Kris strained to hear the chirp from her vehicle as she weaved along the sidewalk. Her heels lodged into the cracks in the concrete, causing her to trip several times. Somerville was such a dump. She should have used the money from selling her mother’s jewelry six years ago on eBay and moved to California. Instead, she’d stayed in this frigid, run-down suburb of Boston. But she knew why she hadn’t. She was afraid if she left, she’d never see her protector again. A day didn’t go by that she didn’t get an eerie feeling that someone was watching her.
Out of nowhere, a chill would travel the length of her spine she’d swear was her Dark Angel’s breath on her neck. But every time she turned around, no one was there. So instead of escaping, she’d used the money to buy a P.O.S. car and drugs and started on her debauched journey. She knew she was better than the life she’d been living, but every night she found the answers no one offered her at the bottom of a bottle.